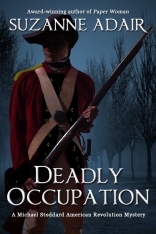 A Different Angle on History and Mystery

I’m a fan of in-depth, accurate history, with a particular interest in the eighteenth century American South, therefore I had high expectations for this book. I’m happy to say it met all of my history buff needs. I didn’t find a single anachronism or inaccuracy—even things I thought had to be wrong turned out to be right. (Did you know that the use of the word “lousy” to describe feeling poorly dates back earlier than the 1780s?) Adair uses her knowledge smoothly, never slowing the story while still effectively setting every scene with the right touches of period detail.

A novel set in North Carolina during the American Revolution with a young British lieutenant as the protagonist gives American readers a new slant on our history. Shortly after British troops occupy Wilmington, Michael Stoddard’s commanding officer asks him to look into the disappearance of a local woman. From that first inquiry, Stoddard begins to trace weapons smuggling and possibly kidnapping and murder. He is not a stereotypical hero. I liked his physical ordinariness, his persistence, and his dedication to his work as a special investigator for the British occupying forces. He’s open-minded for his times, but not so much so as to seem modern. He struck me as too forceful at times, and he misses a few things he should have seen. This mix of flaws and goodness makes him human. He’s not a genius or a saint. He’s a hard-working man in a difficult situation, someone I think most readers will be able to identify with and root for.

The plot is complex and fascinating. The main and supporting characters are fully developed. I especially liked Private Spry, Stoddard’s assistant in the investigations. I also found the romantic subplot realistic and enjoyable. There are a number of strong female characters in this book.

The intertwining mysteries were more than enough to keep me interested. I would have liked the book better without the flashbacks and backstory about Stoddard’s unfinished dealings with a very disturbing fellow officer. I’m a first-class wimp when it comes to reading about that kind of villain, and I’m not fond of long flashbacks, so this material briefly took me out of the story. It looks like it’s a continuing plot thread weaving through the whole series, and I expect other readers may like the idea of an ongoing conflict with a nemesis Stoddard seeks to finally defeat. The book was otherwise a compelling page-turner, and this one shortcoming in my view is due entirely to my personal tastes, not the author’s skill in telling a story. She has mastered that art, and history buffs should get hooked on this series.