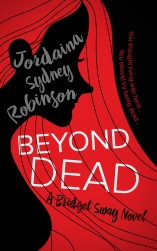 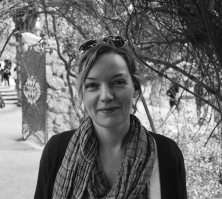 I’m delighted to have Jordaina Sydney Robinson as my guest for the first author interview on this blog.

AF: First of all, the whole concept of the book is great comedy. When you die, you don’t go the heaven or hell, you go to work. What made you think of this?

JSR: To be honest I don’t remember it being anything specific. I think that it was just an idea I had floating around in the back of my head while I was working on other projects and because I wasn’t focusing on it, it developed on its own.

AF: The afterlife Bridget encounters, with its rules and divisions and enforced camaraderie and community-building, reminds me of every bad job I’ve ever had—and of the annoying parts of the good jobs. I’ve sat through faculty meetings thinking about your book and suddenly found it all hilarious instead of tedious. Thank you. What jobs have you had that inspired this aspect of the book? What were the craziest rules or forced let’s-all-get-acquainted activities? (I guess you’d better not name the actual places of employment.)

JSR: The afterlife is really the culmination of every job I’ve ever had … and I’ve had a lot. In my entire life I’ve only ever had two jobs that I’ve held for longer than six months. One I very nearly made it to a year’s service and my current job where I’m around the nine month mark. Both times it has been more to do with the people than the job. So I’ve been through a zillion inductions and am probably more conversant with the ridiculousness of most jobs because I swap too much to become accustomed to it as the “norm”.

There aren’t any specifically crazy rules or let’s-get-acquainted activities that spring to mind. Just the general discomfort of starting a new job and having no clue what you’re doing. I have had to do role-play in interviews or training though. So, so painfully awkward.

AF: Have you ever seen a ghost? If so, where? Do you believe in them?

JSR: I haven’t ever seen a ghost, but I was talking to a friend about it the other day and we were discussing how time works (sounds way more intellectual than it actually was). We were talking about whether it flows from past to future or if every moment of time exists simultaneously and how, if the latter were true, then maybe a ghost is simply a glimpse into the past or future.

But because that type of thinking makes my brain hurt, I prefer to believe in the linear flow of time which also means I do believe in ghosts. I believe an echo of your energy can remain and “haunt” somewhere you felt strongly about or had a strong emotional reaction to/in while the rest of your energy or soul goes to wherever it goes.

AF: Humor is important for facing our mortality. Maybe I noticed this because I’m a good bit older than you. I’m actually going to die someday?! You showed so much insight about attachment to life and to the little as well as the big things that give it structure and meaning, the roles and goals and connections. And it’s never hammered home, never breaks the humorous tone; it’s just there, in the background. Did you think of this as you wrote the book? What work did you have to do to get the balance right?

JSR: I did consider it and I was very aware that elements of the book could be incredibly sad if they were written a certain way (Bridget’s funeral in Deader Still for example). Personally, if someone’s having a bad time I always try to find some humour in the situation to make them laugh or lighten it somehow because I genuinely believe that how you approach or understand a situation defines that situation. I’ve tried to keep this a theme in the book without making it too preachy because, in my heart, I’m a positive person which is why Bridget and Sabrina are always pointing out the silver lining. I think everything in life has a funny or positive side to it, or potentially a really sad side – it all depends on finding the right perspective.

AF: You certainly achieved that in Deader Still. Bridget’s funeral is hilarious.

Next question: Bridget is so frankly, fearlessly herself, character flaws and all, she’s irresistible. Her willingness to break rules, along with Sabrina and Edith, is part of her appeal. I think we all have that urge and don’t dare act on it. In what ways are you like her and in what ways unlike her?

JSR: I absolutely loathe being told what to do so that’s all me, but then I think that’s also most people. As for rule breaking – it depends on the consequences! And if I can see the point of the rule. Wearing a seatbelt? Obviously. Having your main meal before your dessert? I’m much more flexible on those type of social rules.

Also, I’d say I was bravely myself not fearlessly like Bridget. Bridget just is who she is without any thought or care. I’m a little more cautious but I should probably mention that I’m a (ever-so-slightly) rabid feminist so it’s important to me that Bridget and Sabrina especially are strong, fearless and independent characters.

AF: Which came first—the concept of this bureaucratic afterlife world, the idea of a murder mystery among ghosts, or something else? How many versions of the afterlife world did you come up with?

JSR: Oh, the murder mystery all the way! I grew up on Murder, She Wrote and all those types of shows so the dead bodies were never in question. Even when I’m reading your Mae Martin series, which I know doesn’t have dead bodies in it, I still find myself trying to guess who’s going to bite it first! Just the murderer in me 🙂

Everything else just sort of came together and worked out. I only really had the one version of the afterlife which I’ve tweaked (somewhat heavily). I know some of my readers find it a little annoying that I don’t reveal the whole inner workings of the afterlife’s bureaucratic system but for me, that’s kind of the point of the bureaucratic nature of the afterlife. It’s also why Bridget struggles so much because she doesn’t know the parameters.

AF: What are you currently working on?

JSR: I’m just working on the third book in the Bridget series A Little More Dead which I’m super excited about and really enjoying writing but I’m also working on a couple of new projects. One is about a newspaper reporter who investigates spooky happenings and explains them away rationally while solving a couple of murders. The first book in that series is tentatively scheduled for release at the start of 2017. The second project is about the assistant to the four horsemen of the apocalypse. Both are the same universe as Bridget but both have a different tone.

AF: I look forward to reading all of them.

Jordaina Sydney Robinson grew up and, despite many adventures further afield, still lives in the North West of England. For fun she buys notebooks, gets walked by her husky puppy and sings really loudly and really badly whilst driving her trusty old Seat, Roger. If you want to find out just how bad her singing is then you can visit her official website at  www.JordainaSydneyRobinson.com  and ask her.