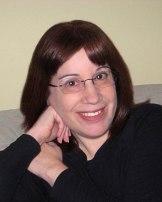 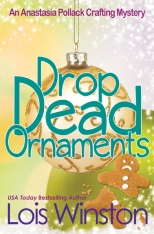 And now I’m happy to have the author, Lois Winston, as my guest for an interview.

Bio: USA Today bestselling author Lois Winston straddles two worlds. She’s an award-winning author of mystery, romance, romantic suspense, humorous women’s fiction, children’s chapter books, and non-fiction under her own name and as Emma Carlyle. She’s also an award-winning designer of needlework and crafts projects for magazines, craft book publishers, and craft kit manufacturers. Like Anastasia, the protagonist in her Anastasia Pollack Crafting Mystery series, Lois worked for several years as a crafts editor. A graduate of the prestigious Tyler School of Art, she often draws on her art and design background for much of the source material in her fiction.

AF: Lucille is so awful and so original, the character I love to hate. There are many bad mothers-in-law in the world, but she’s unique. How did you come up with her?

LW: Lucille is based on my own communist mother-in-law, with whom I had the misfortune of sharing a home for six excruciatingly long years. It was either killing her or taking my revenge out in print. I chose the latter to avoid a long prison sentence.

AF: I personally believe Zack (for new readers, that’s Anastasia’s boyfriend) is really a photojournalist, but she suspects he works for one of the “alphabet agencies.” Will we ever find out? Do you have a plan for this? Or is this top secret? I’ll understand if you can’t answer.

LW: If I told you, I’d have to kill you, and that would also probably result in a long prison sentence. So I’ll stay mum on the subject.

AF: You’ve put your protagonist through quite a few adventures involving crimes in a short stretch of her life. How did you decide to time the events in the series that way?

LW: Chalk it up to poor planning on my part. Had I made Anastasia’s sons younger, I could have stretched the series out over the course of several years. But I started out with Alex and Nick as teenagers, and the first book in the series was already written when I signed a 3-book contract. I quickly realized I needed to condense the timeframe of future books to keep Anastasia’s sons at home as long as possible. So the first seven books in the series take place over the span of just under a year. That may sound like a lot of murder and mayhem in a very short period of time, but not when you consider Jessica Fletcher dealt with a murder a week!

AF: You and your critique partner, Donnell Bell, write in different genres. She does romantic suspense, and you do humorous mysteries. In what way does this affect your critiquing relationship—if it does? Is there a particular benefit to the perspective of someone whose work is different?

LW: The second book I sold, back when I was traditional published, was a romantic suspense. So critiquing r/s is not a stretch for me. As for her, my humorous mysteries provide her with some much-needed comic relief from serial killers. She’s also quite familiar with the genre from her personal reading. Our writing skills are on an equal level, and we really like each other’s work. So writing in different genres has never been an issue. We do sometimes sound like an old married couple, though, as we argue through plot points and character development, but we respect each other’s opinions. Even though our brainstorming sessions can get pretty wild, they always result in better books.

AF: This is a multi-part question. How long does it take you to finish a book? You strike me as super-organized, planning ahead. Do you outline a book or “pants” it? And do you have a series outline?

LW: It takes me anywhere from six months to a year to write a book. Life has a way of getting in the way. I wish I were as super-organized as you think I am! I’ll refer you back to the answer to your third question. I’m a total “pantser”, both for each book and the series as a whole. The most pre-planning I do is a short paragraph similar to a back cover synopsis. Then I wing it. Often I have an idea for how I want the story to unfold, only to have Anastasia refuse to cooperate. So I let her take over.

AF: I enjoy the books for the characters and stories, but I don’t do crafts. Do you find that the majority of your readers are fellow crafters? Do they tell you they do the projects included in each book? I was impressed with directions for making the melted crayon ornaments, by the way, even if I’m not going to make any.

LW: That’s a good question and one for which I don’t have an answer! I often hear from readers, but I don’t remember any of them ever mentioning having made any of the projects.

My background is as a designer in the consumer crafts industry, creating mainly needlecraft and fabric crafts for craft kit manufacturers, craft book publishers, and craft and women’s magazines. My agent thought I’d be the perfect person to write such a series. At the time I was writing the aforementioned romantic suspense and humorous women’s fiction (formerly known as chick lit). I’d never thought about writing a mystery series, but I gave it a try, and here we are. After publishing the first three books in the series traditionally, I turned down two additional contracts to go indie.

AF: Is there anything I should have asked you that I didn’t? Please fill in whatever I overlooked. And thanks for your time.

First, thank you for inviting me today, Amber. I hope that any of your readers who enjoy a good laugh while reading about murder and mayhem will check out the Anastasia Pollack Crafting Mysteries. Kirkus Reviews called Anastasia, “North Jersey’s more mature answer to Stephanie Plum.” And Publishers Weekly favorably compared her to Tina Fey’s Liz Lemon character from 30 Rock in their starred review of Assault With a Deadly Glue Gun, the first book in the series.

Also, along with the seven novels currently in the series, there are also three mini-mysteries: Crewel Intentions, Mosaic Mayhem, and Patchwork Peril. These are available either individually or bundled together in Crafty Crimes, a Trio of Anastasia Pollack Crafting Mini-Mysteries.

Readers can find me at the following locations:

Buy Links for book one in the series, Assault With a Deadly Glue Gun: https://www.loiswinston.com/booksap1.html

I flew through this book. Winston knows how to make a reader turn the page. It’s more than a puzzle to solve—I was rooting for people I cared about. Anastasia Pollack is easy to like, a good mother, a good friend, and in a healthy romantic relationship, the kind of person you’d want on your side in a difficult situation. She’s been through some tough times and keeps her head above water with humor and creativity, never wallowing. I like how she’s comfortable in herself, knowing her own strengths and weaknesses, and acting on her convictions, including her conviction that her older son’s girlfriend’s father is innocent of a crime the police think he committed.

Anastasia’s relationship with Detective Spader is one of the many gems in the story. They’re not quite friends, not quite enemies, but teetering in between, annoying each other respectfully. The dialogue between them is brilliant.

I’m impressed with how Winston has managed to take Anastasia through so many escapades in a short period of the character’s life without making her readers step back and doubt it. One way she does it is through regional color, the nature of crime and family connections in the protagonist’s part of New Jersey. The backstory is blended so smoothly that a new reader could start the series here without feeling lost, but I recommend getting to know the series from the beginning.

The ongoing sagas of Anastasia’s colorful elder relatives—her communist mother-in-law, her spendthrift, husband-hunting mother—continue, adding more laughs. But I have to say, I hope to read a book in which Anastasia and her sons are finally liberated from Lucille.

Check this blog again Sunday for an interview with the author!

Buy Links for book one in the series, Assault With a Deadly Glue Gun