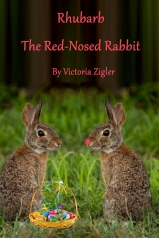 This just came out over the Easter weekend.

I’m sure you’ve heard all about the red-nosed reindeer that saved Christmas. But, have you ever heard the story of the red-nosed rabbit that saved Easter? Everybunny has always teased Rhubarb because of his bright red nose, even though it’s not his fault he was born different. But when a misty night threatens to stop the Easter Bunny from making his yearly delivery of Easter eggs to the children of the world, Rhubarb’s red nose may be the only thing that can save Easter.

Like every book listed on this site, it’s available everywhere, along with this author’s other books.

Jinx And The Faerie Dragons

Jinx’s little sister, Ayla, has warned him time and time again that one day his mischief making will get him in to serious trouble. But Jinx isn’t interested in his sister’s warnings; not even when the trouble she warns him about is a cave full of goblins.

Like most pixies, Jinx loves to play tricks and explore. But, unlike most pixies, Jinx takes his tricks too far on a regular basis, causing chaos and taking risks that no other pixie would even consider, much to the amusement of his faerie dragon friends, Caia and Draco, and the annoyance of just about everyone else; especially Ayla. Now Jinx and his faerie dragon friends are off on a treasure hunt, and not even the threat of being captured and eaten by goblins is enough to stop them answering the call of adventure.”

Mr. Pumpkin-Head And Other Poems

A collection of poems – many with a hint of humour – about nature, magic, emotions, and the world around us.

More books by Tory Zigler can be found on 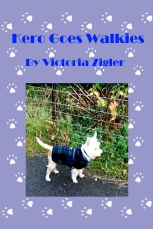 The story behind my decision to write my “Kero’s World” books is a simple one:

When I first started writing a blog, my main topic of conversation was pets. I later expanded my subject matter, but my pets were a big part of what I talked about.  I even sometimes did posts from the point of view of one of my pets, which later turned in to a regular weekly feature.

A few months after I started publishing my books, I stopped blogging.  This was a move I later regretted, and I’m only thankful I didn’t actually delete my blog, but instead made it private.  My blog is now public again – and has been for over a year – and I’ve recently started doing “furkid Friday” posts again. The reason I mention my blog in connection with my “Kero’s World” books, is that, during the time when my blog was private, I was missing entertaining readers with the posts from the point of view of my pets.

I’m sure you can see that it was only a small leap of the imagination to get from thinking about those posts, to coming up with the idea to write a series in a similar tone; telling the events of the lives of my pets from their point of view. The “Kero’s World” series was born from that idea, and was later followed by the “Degu Days Duo” – with more stories from the point of view of my pets to come.

The series was originally planned as a series of six books, but when the real Kero died in August 2014, I wrote a seventh book as my way of saying goodbye to a dog who was more than just a pet to me.  I’m sure you’ve heard this one before, but he really was; Kero was the most loyal of friends, and meant everything to me.

I’m glad I have the “Kero’s World” books to help keep his memory alive, and to let the world meet the dog who spent a decade giving me the loyalty, and unconditional love, that only a dog can give.

Victoria Zigler is a blind author of children’s fiction and poetry.  She has a very vivid imagination, and spends a lot of time in fictional worlds; some created by her, others created by other authors.  When she remembers to spend some time in the real world, it’s mostly to spend time with her hubby and pets, though sometimes to indulge in other interests such as doing crafts, listening to music, watching movies, playing the odd figure game or roleplaying game, and doing a little cooking and baking.  Tori was born in the shadow of the Black Mountains in Wales, UK, has been writing since she knew how, and became a self-published author in 2012.  To date she has published 6 poetry books, 33 children’s books, and a fantasy story in a sci-fi and fantasy anthology, with plenty more planned for the near future.”

Obeying her mother’s warning, Mae Martin-Ridley has spent years hiding her gift of “the sight.” When concern for a missing hunter compels her to use it again, her peaceful life in a small Southern town begins to fall apart. New friends push her to explore her unusual talents, but as she does, she discovers the shadow side of her visions— access to secrets she could regret uncovering.

Gift or curse? When an extraordinary ability intrudes on an ordinary life, nothing can be the same again.

No murder, just mystery. Every life hides a secret, and love is the deepest mystery of all.

Mr. Pumpkin-Head and Other Poems by Tori Zigler

A collection of poems – many with a hint of humor – about nature, magic, emotions, and the world around us.

Look for a guest post from Tori later this week on one of her charming stories for children.

For a chance to win The Calling and other books in paperback, go to